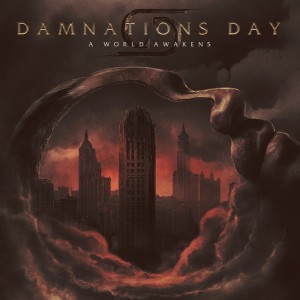 I was very impressed with the debut album by Australians Damnations Day, “Invisible, the Dead.” You could sense the vast potential of this band. The only thing they were “guilty” of, like many young bands, is trying to do EVERYTHING on their first album. Their sound at its core is old school prog metal in the vein of Fates Warning and Queensrÿche. But the band went in a few other directions, like thrash and even sounding like Judas Priest.

With their sophomore album, Damnations Day have clearly grown musically and understand what their true sound is. There’s a consistency to the overall sound on “A World Awakens” which really showcases the band at their very best. The top weapon for the band is still singer Mark Kennedy, who has one of the best voices I have heard in a while. He has great range and power, a true asset for Damnations Day.

With his brother Dean on drums and Jon King on lead guitar, the music is as strong as it needs to be to support those vocals. Bassist Luke Vinken left after the last album so bass duties are handled by Dean Wells, the guitarist/mastermind for Teramaze. The album kicks off with “The Witness” which has strong hooks and a killer chorus.

The album just keeps flowing with great track after great track, “Dissecting The Soul” keeps the momentum going with “Colours of Darkness” slowing down enough to give Mark room to stretch out vocally. GREAT SONG! “I Pray” actually gives Mark a chance to explore a darker, vocal vibe. “Into Black” is the obligatory acoustic number which is another great vocal performance. And “To Being Again” is MASSIVE sounding. THE GUITAR SOLO!!! Ok ok, I could go on and on but you all need to just go listen to this.

What I love about “A World Awakens” most is that the sequencing of the songs is really perfect. The songs flow so well together and you have the right songs following each other. It’s a model of consistency. I would have liked an epic song however so that’s my only complaint. Yes that’s really the only thing I can say against it. Damnations Day have found their sound and let’s hope “A World Awakens” to this band’s talent. [I’ll see myself out.]

Tracklist:
1. The Witness
2. Dissecting The Soul
3. Colours Of Darkness
4. I Pray
5. Into Black
6. To Begin Again
7. The Idol Counterfeit
8. A World Awakens
9. Diagnose