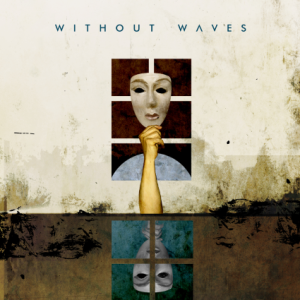 Somewhere between order and chaos, you will find the latest album by Chicago’s Without Waves, “Lunar.” The album changes quite regularly from chaotic math metal like you’d hear from Converge or even the Dillinger Escape Plan to a more ethereal, mystic metal that TesseracT can muster. “Lunar” not only operates on those two extremes but there are layers of all kinds of shit happening during those extremes.

Their name is a tad ironic since if there’s one thing that Without Waves does is create waves. The first two songs, “Sewing Together The Limbs” and “Poetry In Putrid Air” are both testaments to insanity. It’s easy to miss all the things happening because I’ve actually heard different things on each additional listen. The lengthy, decidedly mellow “Us Against” has that same complexity as the first two songs, just with a completely different approach. “Never Know Quite Why” continues this direction before things change again.

This approach continues throughout the album. The band will “play nice” and then the next track they will ATTACK! “Victorian Punishment” actually does both! “EDMS” is positively venomous. “Lost Art” is the other end of the spectrum once again. I guess if you need to settle into a band, Without Waves might not be a safe place for you.

I find this album to be absolutely fascinating. Each time I listen to it, as I’ve said, I hear something else in there. And while this is not a total “headphone” album like the new Disperse, “Lunar” by Without Waves alternates between being a “headphone” album and a “headfuck” album.