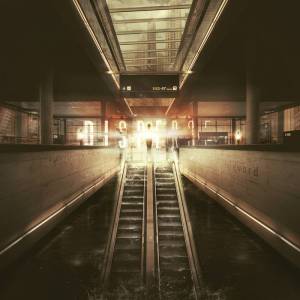 When a band puts out a stellar album, one of two things can happen when it comes to the next album. They either try too hard to replicate the same formula and it comes off as a bad photocopy of that album. The other option is to try to branch out and grow.

With that second option, it’s not a guarantee of success. Some bands lose the plot and forget the sound that brought them success to start with. Other bands, like Disperse, take their sound to new and fresh places without losing the core that defines them. “Foreword” is more than just a follow up to “Living Mirrors;” it’s a band redefining the genre that they are part of. It does not get more progressive than that.

While Disperse were somewhat on the fringe of what I would consider “djent” or tech metal on “Living Mirrors,” on “Foreword” they have let that part almost fall away in favor of melody (albeit very technical melody) along with a TON of atmosphere. The atmosphere is absolutely DRIPPING from this entire album. You NEED to listen to it on headphones to appreciate it fully.

There are some REALLY catchy songs on here, like “Stay,” “Tether,” and “Tomorrow.” Even the more quirky tracks like “Bubbles” and “Gabriel” are still very melodic with “Bubbles” having a weird jack-in-the-box intro that yields to a BUZZSAW guitar riff. “Gabriel” is just so damn ethereal that you need to hear it. There’s this weird vocal sample used on various tracks that really works, it’s hard to explain but check out “Sleeping Ivy” where it’s really used most effectively.

Guitarist Jakub Zytecki is still one of the best players on the planet but he really finds new ways to channel his talent. The 9 plus minute “Does it Matter How Far?” is a perfect example, with the first half of it being purely instrumental. No, it is NOT a shredfest at all! Instead, Zytecki shows both technique and textures which make the song flat out amazing.

Vocalist Rafal Biernacki is one of my favorite singers and on “Foreword” he truly shines. He is not a vocal gymnast. He reminds me of John Mitchell (It Bites, Lonely Robot) in that he has this awesome husky tone that I love. He has plenty of emotion and the right amount for each track. The rhythm section of Bartosz Wilk on bass and
Mike Malyan on drums do not disappoint either.

Normally a foreword is the start of a book, for example. This very well could be the start of something special for Disperse. Not only that but the album could have been called “Forward” because that is clearly the direction that Disperse are pushing their sound. “Foreword” is an otherworldly experience that is incredibly uplifting and something I really needed. Thank you, Disperse.