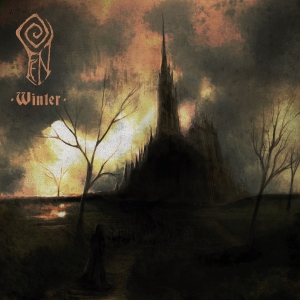 I hate Winter. Well I hate the season of Winter. The latest album by UK atmospheric black metal masters Fen is entitled “Winter” and it makes me appreciate the season as it influences a truly EPIC album. This album is massive both in length and scope. It’s a six part album that is basically like six movements of a larger piece.

I actually do hear it that way rather than an album of separate songs. It works best if you set aside the time and your COMPLETE attention to listen to all of “Winter.” It’s brutal at times, it’s ambient at others, and yes it’s also quite melodic at other times. It reminds me a tad of Enslaved which is always my own benchmark for progressive black metal. Fen are definitely in THAT league.

The album runs the gamut of emotions, albeit most are of sorrow and darkness. But I am always up for that! I particularly love the last two pieces of the album: “Death” and “Sight” because I think it’s both the bottoming out of the emotions (Death) and the ray of hope that you are left with (Sight).

There’s a LOT to take in with “Winter” and to be honest, I know each time I listen to it going forward, I will hear more things. But that’s what makes a great album so great. There are so many layers to each movement of “Winter” that it really is a piece of art created by Fen. It wasn’t enough that Insomnium made me love Winter with “Winter’s Gate,” now Fen has only added to it. I still want Spring, but this will keep me company in the meantime.