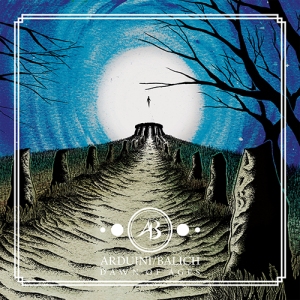 Arduini / Balich are former Fates Warning guitarist Victor Arduini and vocalist Brian Balich of Argus. The style of their debut album is far from Arduini’s roots with Fates Warning. To be fair, he left that band a long time ago. “Dawn of Ages” is progressive doom metal. The closest comparison I can make is While Heaven Wept, who had Arduini guest on their last album.

Arduini proves to be a riff machine on “Dawn of Ages.” The man has so many great ones through out this 79 minute epic album. My issue (one of any way) is his partner Balich. He is a serviceable vocalist but really does nothing for me overall. His range is somewhat lacking and his tone is not appealing to me. Honestly, having a voice like former bandmate John Arch or Rain Irving from While Heaven Wept would be a much better fit.

He just lacks the power that these riffs really need. Add in that drummer Chris Judge is just a timekeeper, it just doesn’t rock as much as it really should. His fills are rather basic and even robotic. I almost thought the drums were programmed. It’s a shame because the FUCKING RIFFS are insane!

The opener “The Fallen,” the massive “Into Exile” remind me of riffs that the legendary Tony Iommi would write. The cover of the Dio era Black Sabbath’s “After All” just underscores that point (The cover of “Sunrise” by Uriah Heep is also impressive). Still, Balich’s voice isn’t bad so the album still has a lot to offer and I am sure many people will love his voice. I’d just rather have someone with range and power. I’m sure I am not getting a Christmas card from him now. “Dawn of Ages” is an impressive, pounding debut from a legendary guitarist and hopefully there will be more to follow.

Tracklist:
1. The Fallen
2. Forever Fade
3. Into Exile
4. The Wraith
5. Beyond the Barricade
6. The Gates of Acheron
7. Sunrise (Uriah Heep cover)
8. Wolf of Velvet Fortune (Beau Brummels cover)
9. After All (The Dead) (Black Sabbath cover)