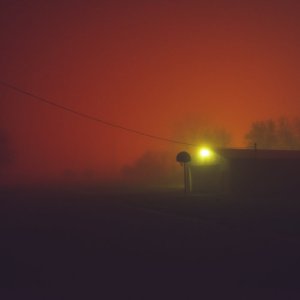 This is one of those reviews that I am writing because I bought the album and love it. This is not something that I was asked to listen to. I need to make that distinction because I was actually drawn to this album in a different way. I had heard of Blueneck’s last album “King Nine,” but as it happens a lot with me, I forgot to check it out eventhough it seemed like something I might enjoy.

I listen to a TON of music as people know so it really sucks when bands like this one get lost in the shuffle. So a month or so ago I heard that they had a new album. “The Outpost.” I have this (weird) fascination with the entire concept of an outpost. The cover photography by the great Lasse Hoile reminded me of my own visions of an outpost and even photos that I’ve taken of a building near me with a dim light shining through the darkness of the night. His photo looks a lot better than mine!

Like I said, it’s something that for whatever reason that I am drawn to. So I had to listen to this album. The title and artwork set the mood and the music follows through! Blueneck have elements of modern prog bands like Porcupine Tree, The Pineapple Thief and even OSI. The atmosphere is beautiful yet at times harsh and maybe even bleak but in a good way!

I love how the opening track “From Beyond” builds and builds and “Ghosts” would be a hit song in another dimension. People know that I am not a fan of fake drums BUT I do love drum machines and electronics when it’s clear that they aren’t drums. I just hate fake drums trying to sound like real ones. I say all of this because Blueneck know exactly how to do those things. “Ghosts” has electronics and they are used perfectly to give the song a coldness it needs.

“Hypnos” and “Hive” are two other tracks that build nicely and marry electronics with thick guitar riffs. While I would never call Blueneck heavy, they use dynamics so well that the guitars FEEL heavier than they really are. The vocals are often delicate, emotional and haunting. There’s not a wasted moment or note on this album. I needed a soundtrack to the weird visions of an outpost that I’ve had in my head for years and Blueneck have given me the perfect one. I also purchased most of their back catalogue including “King Nine,” which is also a great album.