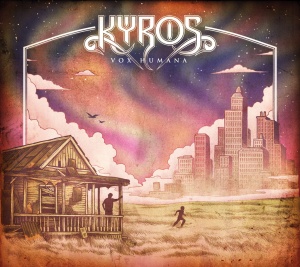 The band Kyros began as Synaesthesia a few years ago and it was essential a solo project of keyboardist/vocalist Adam Warne. Warne hired a band to support the self-titled debut album and eventually the band decided to change its name to Kyros. Yes this sounds a bit chaotic for a new band, and honestly it’s a bit odd in my opinion. But Kyros is an easier name to spell and maybe pronounce.

Kyros does sound like Synaesthesia most because Warne is still very much at the epicenter of the band. His vocals have improved, while his playing is still top notch. The rest of the band are all excellent musicians as well. “Vox Humana” is a double album which is bold for a young band. And as with many double albums, it might have been better served as a single disc.

The title track is the half minute opener of just electronics and tape noise. Can bands just stop having an short intro track that’s a throw away? Next is the aptly titled “Technology Killed the Kids II” which has, you guessed it, too many high tech noises and not enough room for the music to breath. Someone has been listening to Jem Godfrey. It doesn’t do a thing for me. I’d rather listen to Frost*.

The track “Cloudburst” is easily my favorite track on the album and a wise choice as a first single. While it’s a poppy tune, it’s what I call good prog pop. “Persistence of Vision” is another solid, upbeat track that reminds me of Haken. The track is undone by a listless midsection. The song does kick back in but I really wish they had dumped the middle.

The rest of the first disc of “Vox Humana” is along the same lines, decent modern prog in the vein of many other current bands. At times, Warne sounds like a mix of John Mitchell and Jem Godfrey. This just makes me think of It Bites or Frost* or Haken. That’s the issue. Kyros don’t really stand out. Add in that these songs just aren’t as good as the songs of those bands and you see the issue.

Disc two starts off with the clanking “Mind Electric” which walks the line between tuneful and excessive use of technology. Wait. Didn’t I say that about another track? “Speak to Me,” however, is a great track with some awesome keywork from Warne and complementary guitar work from Samuel Higgins and Joey Frevola. It does sound a fair bit like an outtake from “Affinity” with the 80s style electronic drums however.

“Persistence of Perfection” has a majestic intro that I do like a lot. Unfortunately, I lose interest in things midway through the song. “Monster” is a relentless, driving tune that just doesn’t have a strong enough hook. “Hounds” has lyrics that make me cringe, though that’s not the only time for that. “The Darkness Grove” is over before anything happens. “Ego” has horns! While I think that’s cool, it just seems rather sudden and a little out of place. All in all, I think some of the songs just aren’t as strong as they could be.

OK so by now, you assume that I either hate Kyros or they owe me money. Neither is true. In fact, the core of “Vox Humama” is really good and the band have incredible talent. It’s for those reasons that I perhaps have a higher standard for them. They will develop a more unique sound I think. Until then, “Vox Humama” will appeal to fans of modern prog that walks the narrow line between prog rock and prog metal.