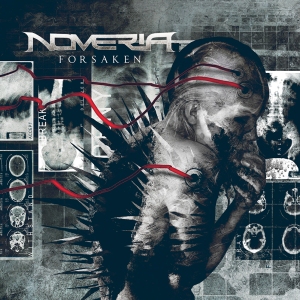 Italy’s Noveria sound a lot like fellow countrymen DGM. Their approach is very similar. The main difference is that Noveria aren’t quite the songsmiths that DGM are. The riffs and hooks on “Forsaken” don’t really stay with you. Plus many times the riffs are just replaced with fast chugga chugga power metal rhythm playing. Consequently, Noveria come off as a bad photo copy of DGM rather than anything original.

This is not to say that the band aren’t talented. They are! Singer Francesco Corigliano has a great voice and excellent delivery. Guitarist Francesco Mattei and keyboardist Julien Spreutels frequently trade solos and are impressive. Still, Mattei just shreds and Spreutels in more of a melodic player so I tend to find the key solos more interesting.

The album is a concept involving “the different states of mind of a person facing a fatal illness.” I really didn’t follow the concept but it’s there. Songwise, the band are more comfortable when they are going as fast as they can like on “Shock.” But they do have more complex and interesting riffs on tracks like “Denial” and “[W]hole,” but the problem is they always retreat to doing a double time beat, rather than letting the groove just happen. They do slow down on “Acceptance” but wind up sounding like an 80s metal band with the backing vocals they use.

There are some guest vocals on a couple tracks that really add nothing. This is partially because they already have a good singer. It’s also because the guest performances are either out of place (death grunts randomly placed on couple tracks) or just out of key (Kate Nord seems to be searching for notes on “When Everything Falls”).

There is no denying that Noveria are talented but “Forsaken” comes off like a band that is overanxious to impress the listener. It might just be their approach or maybe they need to relax a little. Noveria aren’t DGM but fans of that band might like this album. Personally, I’ll stick with DGM and their new masterpiece “The Passage.”