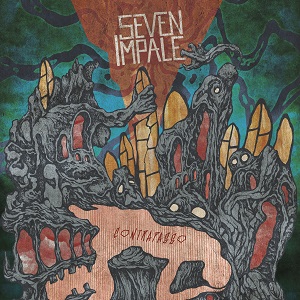 Norway’s Seven Impale caught me totally by surprise with their last album, 2014’s “City of the Sun.” The band melded vintage prog with jazz and psych rock influences. The album reminded me a lot of early Crimson and Van der Graaf Generator. So their new album “Contrapasso” was definitely something I was looking forward to hearing.

Unfortunately after repeated listens to “Contrapasso,” it just doesn’t work overall. The band have upped the jazz quotient on this album and in the process shed some of their old school prog leanings. The songs are more abstract and have far less direction. I will say the instrumental closer “Phoenix” is as good as anything they have done and has enough prog to keep me happy.

The problem for me is that the band experiment a bit too much on “Contrapasso.” I don’t fault them for it at all, it just comes across as unfocused to me. The opening track “Lemma” has too much distortion and that includes the vocals. And there are places where they use a lot of echo on the vocals as well which is rather dated. When you have Stian Økland, who can SING, why downplay that?

Both “Heresy” and “Inertia” have moments that work but each sound like multiple songs within songs. I found myself checking to see where exactly I was on the album. The first single “Languor” is the first track that feels fully realized to me. While it does push the boundaries, it never feels like the band is purposefully trying to lose the listener. The brief “Ascension” is a bit of a throwaway track. It does make for the most focused track at least!

Overall, “Contrapasso” feels very forced, like the band was really trying to do as much as humanly possible on each track without worrying whether it was a good idea or not. While I do think this is the core of creativity, it’s also a very high risk proposition. “Contrapasso” is an album that people will either love or hate. Seven Impale should be commended for making an album that cannot be ignored. I am just not into it and maybe down the road it will make more sense. For now, they’ve lost me.

I have been a fan of progressive metal and progressive rock for most of my life. My music collection is insanely large. My passion for life is music...progressive music!
View all posts by Rob →
This entry was posted in avant garde, jazz, progressive rock, psych rock and tagged music review. Bookmark the permalink.