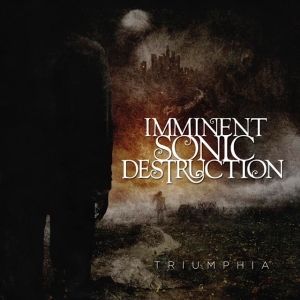 I love Imminent Sonic Destruction. I have been a fan since I first heard their debut album “Recurring Themes.” That album shows so much talent and depth which makes it hard to believe it’s their debut. It’s been four years since that album and the band have been working hard on the follow up “Triumphia” which is a concept album. Yes a concept album about a dystopian future.

Now, I know we’ve had more than a few concept albums and even had some about that very subject, but unlike the musical, Disney theme of Dream Theater’s “The Astonishing” and the rather bleakness of “Future History” by Family, “Triumphia” walks a comfortable middle ground when it comes to the overall story. But I’ll let the listeners analyze that on their own.

Musically, the band as a whole sound really good. Frontman Tony Piccoli sounds great and the band are as tight as ever through out the album. The songs are hooky and memorable which despite them being complex, this has always been a strong suit for ISD. However, there are a couple of issues that I have with the album that disappoint me a bit.

First off, someone needs to take away keyboardist Pete Hopersberger’s piano patch. It’s EVERYWHERE! The problem I have with it is that it just sounds shitty. It’s muffled and has no depth which is the case with a fake piano sound. It’s fine for mellow parts but ISD are a heavy band and the keys sounds reflect that. An example, the lead single “The Fog” has this cool tight instrumental refrain that would sound amazing with a synth. Instead, that sound just takes away from the overall bite.

Second issue is that they use a guest vocalist on two tracks. Why do bands with great singers use outside vocalists? Regardless, it wouldn’t matter if the guest vocalist was amazing. I just don’t like Rachel May’s voice. She sounds like she sings for an 80s hard rock / hair metal band. The final track on the album “Arborous Calm” is FUCKING AMAZING at 22 minutes. The song has great sections and segue…until her part kicks in and it’s just frustrating. This song would have been the best ISD track to date but I wind up skipping thru that section.

So the core of “Triumphia” is great. The opening track “Crashing Waves” comes out swinging and it does POUND! “The Knife” is another classic kick ass ISD track. “Triumphia” like a great meal that has some bad seasoning and is served with a type of food you are allergic to. You can pick around the food and maybe get used to the seasoning. If you can do that, there’s a lot to enjoy. ISD are a great band and “Triumphia” is an album that many of you WILL enjoy, seasonings and all!