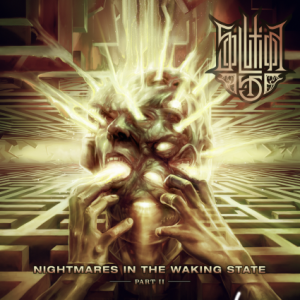 Solution .45 are back with their follow up to “Nightmares In The Waking State – Part I” called, appropriately “Nightmares In The Waking State – Part II.” Part II was recorded at the same time as Part I, with the original idea being a double album. While I think a double album can often be overkill, it can also be too much for a listener to take in. This is especially true for a band that plays the complex material that Solution .45 does.

While there are obvious similarities between the two parts, I like Part II even more. The songs seem stronger than ever. The album starts with an overture of sorts with “Dim are the Pathways.” The instrumental sets the mood nicely. The opening synths remind me a little of the NOMACS found on Dream Theater’s “The Astonishing,” though these are less annoying and yield to some very beautiful strings. It’s a stirring introduction to be sure.

“The Faint Pulse of Light” kicks things into gear and yes the song does remind me of Scar Symmetry, which is inevitable. Vocalist Christian Älvestam (formerly of Scar Symmetry) has developed his black metal snarl and it sounds great alongside his death metal barking. He continues the approach on “Mind Mutation” and adds his stellar clean vocal. He is a man of many voices and uses them all so well.

“Built on Sand” features more dynamics which makes for a welcome change of pace. It has a quieter opening and a great HEAVY chorus, with Älvestam alternating between harsh and clean vocal, like a duet with himself. The song kicks major ass and was a great choice as first single from this album. The solo section on this song is prog as fuck too. “Impeccable Dream” has a killer chorus and would make an excellent single.

Other favorite tracks include the stuttering riffage of “What Turns the Wheels” and the awesome closing track “Heavy Lies the Crown.” The former has the best chorus and melody on Part II, and Part I for that matter. It’s easily my favorite track. The latter has the task of basically closing out BOTH parts of this epic and does the job with an awesome groove, heavy pre-chorus and a powerhouse chorus. It might not be a lengthy track but as good as the song is, it doesn’t need to be.

Solution .45 have done it again or I suppose they already did it since this is just the last part of the double album that never was. “Nightmares In The Waking State – Parts I & II” are both amazing and show the growth of this band from their debut album “For Aeons Past.” Both parts are a testament to what an incredible band that Solution .45 have become.

Tracklist:
1. Dim Are The Pathways
2. The Faint Pulse Of Light
3. Mind Mutation
4. Built On Sand
5. Inescapable Dream
6. The Curse That Keeps On Giving
7. Chain Connector
8. What Turns The Wheels
9. Misery Mantra
10. Heavy Lies The Crown