Dream The Electric Sleep – “Beneath The Dark Wide Sky” 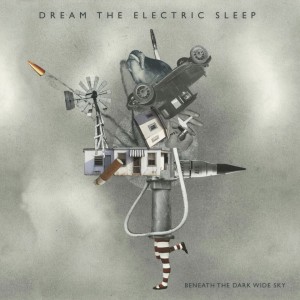 I love Dream the Electric Sleep. Let’s just make that clear right off the top. Their last album “Heretics” was in my top 3 for the best albums of 2014. It is an absolute masterpiece. So topping that album was going to be hard as far as I was concerned. To make matters worse, the band announced that Nick Raskulinecz was going to produce the follow up.

Raskulinecz is very well known for producing the Foo Fighters and Rush, among others. He has a big name and one that I never remember how to spell. I think that Raskulinecz (yes I am copying and pasting each time) is one of the most overrated producers in all of music. Anyone who can’t get a consistent snare sound from Neil Peart should not be producing or mixing Rush. Plus he seems to love things really loud.

The good news is that he didn’t fuck up DTES’ new album “Beneath The Dark Wide Sky.” It makes me wonder how can he get this one right and make “Clockwork Angels” sound so inconsistent and too noisy. Enough about him. The band deliver on every single level on “Beneath The Dark Wide Sky.” The songs are first and foremost for DTES and this album is another example of that!

Whether it’s the aptly named “Drift” or the hit singles that should be in ” Let the Light Flood in” and “Flight,” you REMEMBER these songs. As soon as I even SEE the song title for “The Good Night Sky,” I am singing “Goodnight Mirabelle, I wish we were high as the moon.” IT’S SO DAMN GOOD!! You can’t resist hooks that catchy!!

Beyond that, the progressive instrumental “We Who Blackout The Sun” and the epic “Culling The Herd” are two of my favorite songs. Each showcase how well DTES write great riffs. “Culling the Herd” has an expansiveness to the end of the song that is SO atmospheric. And the one/two punch closing tracks “Black Wind” and “All Good Things” remind me structurally of the trilogy at the end of “Heretics.” The songs segue so perfectly, it makes for the perfect ending to a fairly perfect album.

Matt Page has one of my favorite voices. He can flat out sing and always does so with such commitment and honestly. The rhythm section of Joey Waters (drums) and Chris Tackett (bass) are air tight and never over play which is also true of Page’s fretwork. “Beneath The Dark Wide Sky” was one of my most anticipated albums of 2016 and DTES have delivered another masterpiece, an album packed with melody, power and great music.