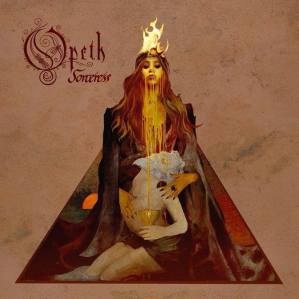 I debated on whether or not to review the first single from the new Opeth album, the title track from “Sorceress.” Not because I don’t like it or whatever, but it’s just one song. I don’t have a shitload to say about one song but why not say it anyway? Nothing wrong with that.

The jammy, jazzy intro to the song reminds me a lot of “Eternal Rains Will Come” which was on “Pale Communion.” In fact, this song would not sound out of place on “Pale Communion.” It is heavier as is clear once the main guitar riff starts. Heavier than most material on the last 2 albums but of course not as heavy as older Opeth. Nothing wrong with that either.

Parts of the song remind me of the vibe on “Pale Communion” as well. “Sorceress” even sounds ever so slightly like “The Devil’s Orchard” in some ways. I will say that I wasn’t surprised that the song sounds like prog stoner bands like Baroness or Mastodon. The title lends itself to be associated with those types of bands. Nothing wrong with that either.

So I can think of nothing wrong with the song “Sorceress.” However, as first singles go, I prefer “Cusp of Eternity” but this song is a better song than the aforementioned “The Devil’s Orchard.” My hope is that it fits well within the album as a whole. I am sure it will since I’ve never disliked anything Opeth has done and that hasn’t started now. Good song, maybe a great one with time.