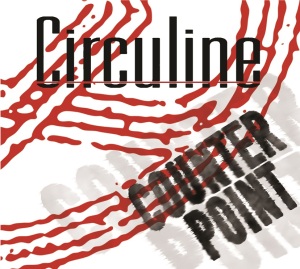 I reviewed the debut album from prog rockers Circuline a while back and the band from Red Hook, NY are back with the follow up. I was hoping to like this one more than the first album but I don’t. The problems that I had with the first album are still there and there are a few others that have manifested.

The first track “New Day” takes way too long to become listenable. About half way in, it gets to become a song versus a lot of noise with NASA samples over it. That is a basic microcosm of my issues with “Counter Point” as a whole. There are parts of each song that work for me and other parts that don’t. “Who I Am” has a good main riff that drives along before it gets rather sappy when the vocals kick in. I still can’t for the life of me figure out why 2 vocalists are needed when they sound so alike. “Forgotten Planet” has that echo backing vocal style that is cliche and been done to death. I guess that’s why you have 2 vocalists.

The longest track “Hollow” has the best potential. The music is edgy which is welcome but the vocals are rather Broadway which does the music no favors. I had that issues on the first album. The other thing is the song probably should run about 7 minutes rather than almost 11. The rest feels like filler. And there are some instrumental tracks like “Erosion” which probably were fun to record but are not something the listener will enjoy more than once, if that.

The band have a lot of guest guitarists on the album which is very cool. Stanley Whitaker of Happy the Man, Matt Dorsey of Sound of Contact and Douglas Ott of Enchant are a few of them. The problem is I’m just not into the songs so these nice bonuses don’t make things better. If I was willing to eat the frosting and skip the cake, that might work out. Still, the band has talent and that is clear which is why I am being so critical. They are nominated for a PROG magazine award and I wish them well. I’m sure many fans of neo-prog will find “Counter Point” quite appealing. It just wasn’t right for me.

I have been a fan of progressive metal and progressive rock for most of my life. My music collection is insanely large. My passion for life is music...progressive music!
View all posts by Rob →
This entry was posted in neo-prog and tagged music review. Bookmark the permalink.