Posted on June 25, 2016 by thenihilistchamber 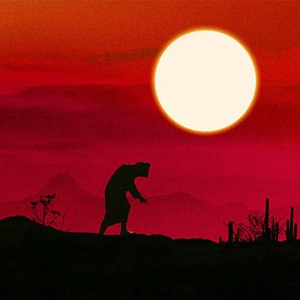 Disclaimer: this record is very heavy. There are guttural vocals, blast beats, and granite crushing riffs for days. Turbid North, the Texas-by-way-of- Alaska trio, will never be mistaken for Pink Floyd (although they are very assuredly influenced by them) and that is okay. Progressive music comes in many different flavors, and this one happens to taste like a wrecking ball smashing the listener to dust in a barren and sun scorched future hell-scape. Sound intriguing? Read on.

I discovered this band on a late night new music search, and was instantly drawn to their interesting brand of prog-inflected death metal. While their first record “Orogeny” displayed a band very clearly trying to coalesce some very disparate influences into their own sound, long awaited follow up “Eyes Alive” is meticulous and precise, and truly feels like an evolution of what the band was attempting to do the first time around. It trims the fat and sounds confident and assured, while not losing any of what made the first record stand out. They are conceptual, heavy, diverse, and unabashedly metal.

To sum up the sound of the band, one only needs ask the question: “What would Mastodon sound like if they were heavily influenced by early 90’s death metal, with a heaping helping of psychedelia?”. The answer to that ageless question is provided here, and it is the perfect soundtrack to a heat stroke induced hallucinatory stroll through the desert. And I mean that in the best way possible. While not as rhythmically complex as the aforementioned band, this trio focuses more on their stylistic dynamics to carry their songs through big peaks and valleys. One minute the record presents a solitary, echo laden, bluesy guitar set against a wide open backdrop, all big sky and tumbleweeds. The next minute a crushing, doom-y funeral dirge ebbs and flows, followed by a death metal blast and solar plexus assaulting stop start riff-age. There are equal parts soulful groove, twisting technical workouts, and expansive soundscapes to be found here.

The record follows an interesting structure. The first half is unabashedly heavy, and relatively straightforward. The opening salvo of “Eyes Alive”, “The Pyramid Drones”, and especially “Destroyer of Worlds” had me restarting the songs just to revel in the crushing heaviness on display. Although the quality of death metal early on is admirable, I was a little worried that the record wouldn’t be as far reaching as the previous outing. The first three tracks are all unique enough in their own right, but like any riff driven death metal, a 45 minute record full of these types of songs runs the risk of beginning to bleed together. However, right around the halfway point things change in a big way.

“Red Giant” ushers in an absolutely massive tom-driven groove that acts as a segueway to the more adventurous second half of the record. From here tracks like “Black Sun Rising” really hammer home the unique elements that this band blends to such great effect. Here it’s blazing fast and technical double kick juxtaposed under a bouncing, down-tuned hard rock groove riff. They follow that with a great chorus, an interesting and ever building synth-kissed bridge, and then a sludge break right when the momentum reaches a fever pitch. Its great stuff, and always interesting.

Album highlight “Bring Home the Mother-lode” manages to bring all of the disparate elements of the band together in spectacular fashion, and truly makes good on the promise of “Orogeny”. The song really scratched the Mastodon itch that I have had since “Crack the Skye”, and it really leaves the listener with the impression that this band is on to something special here. They are standing on the shoulders of giants, but with one foot firmly planted in the metal realm, as it seems they have, their genre bending excursions only serve to diversify their sound and not (yet anyway) dilute it.

Sonically the record is punchy, clear, and dynamic. The trio here sounds massive, and they have found the perfect guitar, bass, and drum tones to accentuate this. The record has a raw feel to it, while remaining tight, which is a balance that I can really appreciate.  The power and diversity of the music is expertly conveyed by the mix, and the music flourishes because of it. A watermark for sludgy prog metal to be sure, if for the guitar and drum sounds alone.

Turbid North is a band to be excited about. I waited years to hear this record and I was not disappointed when I did. So it is interesting that nobody seems to have heard of them, and that should change. With each subsequent release they have sharpened and focused their blade, and taken aim at what type of band they want to become. Even if it takes another 5 years to get to record number 3, if “Eyes Alive” is any indication the wait will be well worth it. Check this record out. It may just cure an itch of yours too; one you didn’t even know you had.