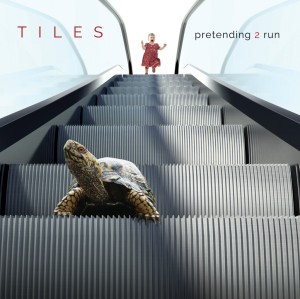 “Pretending 2 Run” marks the return of Detroit’s Tiles, with their last studio album being 2008’s “Fly Paper.” While the band has taken a few years between studio albums before, they’ve never taken 8 years. To make up for lost time (and probably because they had enough music), “Pretending 2 Run” is their first double album. Double albums can be a tricky affair since many have a shitload of filler and could be trimmed to a single album.

Tiles have been a favorite of mine since way back in 1997 when I first heard “Patterns” from the “Fence the Clear” album. They were one of the few bands to actually have a Rush influence and show it in their music. Many bands claim Rush as an influence but you never hear it. It’s always been centered around Chris Herin whose guitar work owes much to the great Alex Lifeson. I think that’s awesome since Al is SO underrated and more people SHOULD sound like him.

Add to all of this famed Rush producer Terry Brown and artist Hugh Syme, and the Rush comparisons will always exist. Rush might take note since the sound on “Pretending 2 Run,” like all of Terry Brown’s productions, sounds amazing. It’s a lot better than Nick whatshisname who readily fucks up each Rush album he touches. So the stage is set: plenty of songs, great production, great artwork and a great band. But wait there’s more!

“Pretending 2 Run” also has a host of musical guests. Kim Mitchell, Mike Portnoy and his son Max, Ian Anderson, Kevin Chown (the original bassist for Tiles), keyboardist extraordinaire Adam Holzman, Mike Stern, Colin Edwin of Porcupine Tree, Matthew Parmenter of Discipline and a LOT more that you will need to read up for yourselves. So not only are there are a lot of songs on here, but a lot of human beings too.

And now, after wasting much time with background info, what about the damn music? First off, it is a lot to take in musically. Tiles take a few risks on this album which is great and I think having as much room as they do on a double album allowed them to do that. The intro to the lead track shows that this won’t be a “typical” Tiles album. Having the balls to include some rhythmic programming and other more “modern” sounds shows that Tiles isn’t simply going to rely on what has worked for them in the past.

They also use most of their musical guests more like members of the band. Having Adam Holzman on “Taken by Surprise,” which is my favorite track, is genius. I think it points out that they might consider a full time keyboardist on all of their music. The song is dynamic and it has a catchy hook, something Tiles has always been good at. “Stonewall” is a good track for Mike Portnoy has he can show off a bit but at the same time, there are quieter parts to the song and he shows RESTRAINT! WHAT?! Well done.

I will say that I prefer disc one to disc two but that’s not to say that disc two isn’t good. I look at it as a bonus disc. Given that “Fly Paper” was not very good in my opinion, it just makes “Pretending 2 Run” even better overall. “Weightless” is a trippy song with a vibe that I haven’t heard from Tiles to this point. “Other Arrangements” is actually a solo piece for Holzman. See? You guys need him or someone like him.

“Pretending 2 Run” is the best Tiles release since “Presence of Mind,” which is still far and away my favorite Tiles album. This album doesn’t have the big songs that that one does but it’s far more consistent than “Window Dressing” and a TON more listenable than “Fly Paper.” Yes “Pretending 2 Run” could have been a single disc but Tiles rewarded their fans with a huge effort and it does pay off. While being as excessive as hell, “Pretending 2 Run” isn’t full of filler but it’s definite full of everything else!