What Escapes Me – “Egress Point” 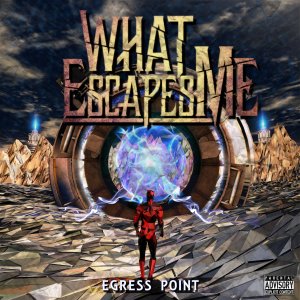 Hailing from Kolkata, India, What Escapes Me plays progressive metal that will appeal to many listeners. Their CD “Egress Point” was released on April 27, 2016 and has been an independent, DIY venture.

Track one is instrumental and introduces a stringed instrument called the sarangi which produces a tone which I mistook for a voice; it produces a very cool effect which enhances the song tremendously. The metal kicks in for track two and the djenty rhythms sound familiar, similar to Tesseract. Multiple vocal styles (some call clean and dirty) corral us further into known territory if you listen to progressive metal. The dual guitars take two routes; one chugs with syncopation and the other is atmospheric and wrapped in effects.

The heavy vocals leave a little to be desired, as if more work needs to be done to achieve the desired effect, however, the words are understandable which is appreciated. The clean melodies and harmonies are very enjoyable. Great rhythm and syncopation are featured in track 3 with many tempo changes and I surmise that great care was taken to weave all these parts together. The sarangi appears again and vocal lines refer back to track two which ties all three tracks together in a surprising way.

I like the bass sound on track 5; will have to take note of whether this sound is used throughout the CD or just on this track. The riff to introduce track six is top notch but the mid-section has a few chord changes that I find difficult to appreciate. Empty Signs, track 7, takes a chance with a reggae opening but moves into more familiar metal territory. The dual guitar lines towards the end of the track are great. Killing Tomorrow has some great vocal melodies and great syncopation.

Track 9 features a stringed instrument called the sarod and this widens the tonal spectrum in a great way. The Bandcamp page lists keyboards on track ten however the sounds I hear are of tabla; thumbs up for that. The harmonized vocals after the half-way point are also well placed.

I think What Escapes Me is talented and have some great ideas including tight riffs, vocal harmonies, and crisp production. I’d like to hear even more of the non-traditional instrumentation worked in to more compositions. A very mature debut recording.