Knifeworld – “Bottled Out of Eden” 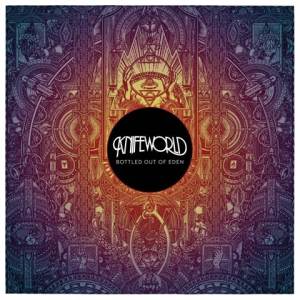 After trying to like Knifeworld’s last album, “The Unraveling,” I was concerned about having to review their new album “Bottled Out of Eden.” I listened to this album over and over, hoping for a different result. Nope. I am still not a fan of Knifeworld. However, I can at least say why I don’t like them and I can even say what I DO like.

For starters, there are some very talented musicians and even some very catchy songs on “Bottled Out of Eden.” The opening track “High / Aflame” is one of the better songs on the album. “I Must Set Fire to Your Portrait” is another. But on that track the problem becomes apparent to me midway into it. I just cannot take Kavus Torabi’s voice!

I don’t like his tone nor his thick British accent. Sorry to my UK friends. I don’t mind accents but when you add bad tone to annoying accent, the results aren’t pleasing to me. The harmony vocals aren’t good either. Another issue is how the horns are used. They tend to just hold notes versus playing melodies or technical parts. It’s boring as HELL. Each song I think “ok this time the horns will do something wild.” Nope.

The bottom line is Knifeworld are not the Cardiacs. That would have been my expectation but it’s not even close. Torabi is not a good singer and sure there are bands that don’t have stellar vocalists. He isn’t even that good though. With “Bottled Out of Eden,” I can safely say that I just don’t like what Knifeworld have to offer. If you liked their past material, you’ll like this one. If you are hoping this one will change your opinion of the band, this review is your warning.

So I decided to revisit this album. Why? Well I actually listened to the new Gong album, “Rejoice! I’m Dead” and I was blown away at how great album that is. So it got me thinking about this one. Since Torabi is in both bands, perhaps with some distance I might understand Knifeworld a bit more.

So I will admit that I was FAR too critical and down right mean in this review. I was also wrong. First off, Torabi CAN sing. He does have a distinct voice which I think might sound better on the Gong album. Part of that is the harmony vocal on “Bottled Out of Eden.” I still don’t care for that approach.

The music is actually quite good at times. I still like “High / Aflame” but I also think “I am Lost,” “A Dream About a Dream” and the closing track “Feel the Sorcery” are pretty good as well. But again, the tracks on the new Gong album are just stronger.

So I admit I had this one wrong. I don’t love it but I don’t hate it either. It’s a good album by a highly skilled band. I think I had a preconceived notion going into this album which is not the way to approach it at all.

I have been a fan of progressive metal and progressive rock for most of my life. My music collection is insanely large. My passion for life is music...progressive music!
View all posts by Rob →
This entry was posted in art rock, pop rock, psych rock and tagged music review. Bookmark the permalink.

8 Responses to Knifeworld – “Bottled Out of Eden”