Entheos – “The Infinite Nothing” 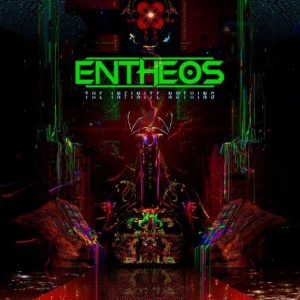 The cliché “the whole is greater than the sum of its parts” is apt. Featuring drummer Navene Koperweis (ex-Animals as Leaders, ex-Animosity), bassist Evan Brewer (ex-The Faceless, ex-Animosity), along with Cheney Crabb on vocals and recently-enlisted guitarist Malcolm Pugh (replacing Frank Costa in the 11th hour before recording began), Entheos have recorded their debut full-length “The Infinite Nothing” (TIN) which hits streets on April 1. If groovy, extreme metal is your bag, baby, then skipping this release would be a mistake.

I can identify the bass on this recording and saying that Evan’s performance is brilliant would be an understatement. The throaty snap of the strings reminds me of Doug Wimbish (Living Colour). Bass solo on track 2? Check! Really, if there was only one reason to pick this up, Evan would be it.

But that’s just a start. Drummer Koperweis plays drum parts that are precisely what each track needs; solid yet frenetic and full of feeling. These parts are what my mind randomly generates when I’m thinking of metal music, lots of double bass and syncopation, fitting the music perfectly.

Entheos isn’t the first extreme metal band to feature a female vocalist, and I don’t think that factoid matters to them; Cheney Crabb could have easily replaced Brandan Butler from Veil of Maya (have you seen her audition on YouTube?). The vocal production is also top notch, layering of different timbres (think Michael Lessard’s dirty vocals).

Malcolm Pugh was brought in and recorded a handful of solos for TIN so I’ll withhold judgement at this time but I have faith in the choice. As far as the guitar on TIN goes, you’re going to get that head-bobbing combination of chunky and funky palm-muted death metal goodness. It’s heavy as hell and a thorough riff-fest. There are short electronic/ambient sections to cleanse the palate (mid track 1, end of track 3, intro track 5) and synth licks on track 7 (not to mention some mind warping at the end of track 7) so Entheos has more than just metal tricks up their sleeves.

Come for the bass, stay for “The Infinite Nothing.”