Eternity’s End – The Fire Within 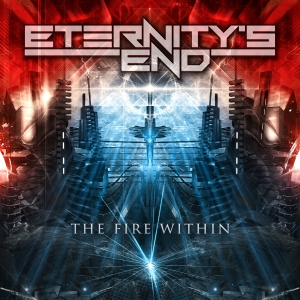 The main reason this album interested me was the lineup of Eternity’s End. The band consists of guitarist Christian Muenzner (Alkaloid, ex-Obscura) , bass player Linus Klausenitzer (Obscura, Alkaloid) and drummer Hannes Grossmann (Alkaloid, Blotted Science, ex-Obscura). Being a big fan of those three and both Alkaloid and Obscura, I had to hear this album. I knew of vocalist Ian Parry from Elegy so the only real unknown for me was keyboardist Jimmy Pitts.

“The Fire Within” was also co-produced by Per Nilsson of Scar Symmetry, a band that I really love. So what could possibly go wrong? Well, it’s not prog metal. This is definitely more power metal than prog metal. But that’s okay, I can handle that. The problem is that Parry’s voice has definitely seen better days. Also, Klausenitzer is virtually missing in the mix. He has such a distinct fretless bass that it’s a real crime that he can’t really be heard at all!

The songs are fine but certainly nothing like Alkaloid or Obscura. The closest comparison would be Muenzner’s solo albums which still were more prog than “The Fire Within.” There are plenty of tasty solos which is awesome. I just really wish the songs less like Malmsteen shredfests. One exception for sure is “The Dark Tower” which has some tasty acoustic passages plus a very grandiose sound. Again, Parry’s vocals really kill what could have been a great song. He reminds me a bit of Charlie Dominici for some reason. He does hit high notes but damn they are uncomfortable.

There’s definite potential with these musicians and perhaps with a vocalist like Hansi Kürsch of Blind Guardian, the album would be amazing. Unfortunately, there’s just a lot of flash and not much substance to what Eternity’s End has to offer. I’ll wait patiently for the next Alkaloid album and keep spinning the new Obscura in the meantime. But if you love power metal and/or speed metal, this album is worth you checking out.

Tracklist:
1. The Fire Within
2. Demonblade
3. The Hourglass
4. Eagle Divine
5. White Lies
6. Twilight Warrior
7. Chains Of The Earth
8. The Dark Tower
9. Moonstruck
10. The Fall Of The House Of Usher

I have been a fan of progressive metal and progressive rock for most of my life. My music collection is insanely large. My passion for life is music...progressive music!
View all posts by Rob →
This entry was posted in power metal, speed metal and tagged music review. Bookmark the permalink.