SKUGGSJÁ – “A Piece for Mind & Mirror” 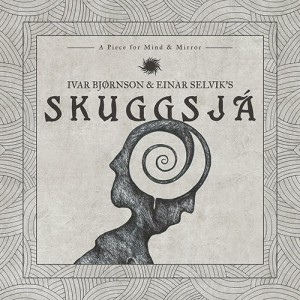 SKUGGSJÁ is a special project from Ivar Bjørnson of Enslaved and Einar Selvik of Wardruna. It was written for the 200th anniversary of the Norwegian Constitution and chronicles the history of Norway. This is an album of epic proportions as you can imagine.

Musically it is a unique combination of metal instruments with some of Scandinavia’s oldest instruments. The lyrics are basically poetry in “Proto-Scandinavian, Norse and Norwegian.” The idea being that it combines the present day sounds with those of the rich history of the region.

Obviously, those expecting it to be comparable to an Enslaved album are going to be surprised. While it has some of those elements, it’s much more than that. It’s more like a piece of art than a typical album. It’s a soundtrack of history, deeply rooted in culture. Not being Norwegian, I am at a disadvantage when it comes to truly understanding the words, obviously, but there’s no mistaking the beauty of each piece.

The instruments that Selvik plays are ones that I did need to look up! He plays the following: tagelharpa, Kravik-lyre, goat-horn, birch-bark lure, bone-flute. It’s interesting that these native instruments actually give the album an almost Middle Eastern vibe. The opener “Ull Kjem” has some poetry before some wind instrument starts and it’s that part that feels very other worldly. It gets even bigger and richer with an orchestral like section that just adds to the drama of the track. While “Rop Frå Røynda – Mælt Frå Minne” feels VERY Middle Eastern with a violin playing along with an electric guitar on the song’s main riff.

The title track is another of those songs that does give a nod to modern day metal with some solid, heavy riffing. It definitely could have been make into an Enslaved track with very little extra work. So much so that Grutle Kjellson even adds his instantly recognizable harsh vocals. “Tore Hund” has some very unique string-like sounds which I am assuming is a tagelharpa or a Kravik-lyre. But that’s why “A Piece for Mind & Mirror” is so interesting. There are sounds that you have heard many times merged with other sounds than sound very different from what you are used to hearing.

These aren’t typical verse/chorus/verse songs. And while there are refrains in some of them, they feel more like offerings to nature. And while it is very incredible musically, I am not a fan of spoken word. Especially if I can’t understand it. This is not a criticism but more of a limitation on my part. So it does become an album that I have to be in the mood for listening to rather than something I can just casually listen to. There’s no crime in that at all. Ultimately, “A Piece for Mind & Mirror” is very much a masterpiece of love and eclectic beauty.

I have been a fan of progressive metal and progressive rock for most of my life. My music collection is insanely large. My passion for life is music...progressive music!
View all posts by Rob →
This entry was posted in atmospheric metal, folk metal, progressive metal, viking metal and tagged music review. Bookmark the permalink.