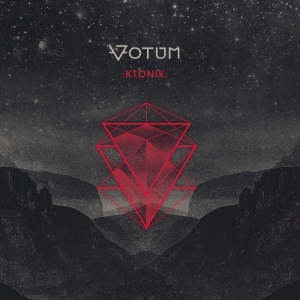 This is a tough review for me to have to write. Votum’s last album “Harvest Moon” was an absolute masterpiece. The songs were well-written, melodic and truly progressive. Vocalist Maciej Kosinski had one of the best voices that I had heard in a long time. The song “Bruises” is still one of my favorite songs of all time. The album was THAT good.

Unfortunately, Kosinski left the band. I was concerned. He was replaced by Bartosz Sobieraj. I listened to a track from his previous band. I was more concerned. And now, we have the first album with Sobieraj on vocals, “:KTONIK:” and my fears have been realized. Sobieraj simply does not have the voice that Kosinski did. I didn’t like his voice at first and still REALLY prefer Kosinski, but that’s not an option.

The track “Spiral” had a chance to be a favorite track only to be undermined by an annoying vocal effect toward the end. I can deal with it because it’s at least brief. The key for me was to get used to Sobieraj’s vocals. He doesn’t have the same style and he is not as bad a singer as I had made him out to be. He is at his best when he is belting out his vocals. I am not not crazy about his voice when he sings quieter. The heavy accent does bother me, I’ll admit that.

The problem that I had was basically I wanted an album similar to “Harvest Moon.” That’s clearly not what Votum wanted to do and after listening to this album again, it probably wouldn’t have made sense for them to do that. “:KTONIK:” reminds me a little of “Metafiction” when it comes to being heavier and bigger sounding than “Harvest Moon.” I do like that about the album as it turns out.

I am always willing to admit when my opinion changes about an album and that’s the case here. I don’t LOVE “:KTONIK:” but it is not the massive disappointment that I made it out to be either. It’s an album that needs time and also needs me to stop fucking comparing it to the last album. That last bit is too hard to not do.

Update: I was actually right the first time I reviewed it! The vocals have proven to be too big of an issue for me. While I think musically this album does sound good, Bartosz Sobieraj just isn’t a  good vocalist. I was able to overlook it for a while but repeated listens just prove what I thought initially. He is a huge step down and there’s no point in sugar coating that fact. I’ll give the album a 5 which is more than fair!