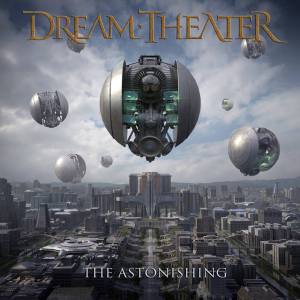 This has become one of the most anticipated albums of Dream Theater’s career. The hype machine went into overdrive once it was announced exactly what the band was planning to do with this album. I should point out that on the Facebook page, I did make an insane prediction that the next album would be a double concept album. Part of me was reading into the overall delay of this album, which was initially targeted for the Fall of 2015. The key was considering what the band hadn’t done up to this point of their career.

“The Astonishing” really goes beyond what I had even predicted them to do. This isn’t just a concept album but a true rock opera, or even a musical of sorts. The story line is a combination of Game of Thrones and 2112, so it’s not necessarily original but what is at this point? I will admit that for a fan of prog, I am not always keen on concept albums that tell a story. This is mostly due to the songs sometimes being forced to fit a plot line and not being true songs that can be enjoyed separately from the whole album.

The story is somewhat cliche and even obvious at times but the emotion and sentiment of the lyrics always seem to work for me despite all else. I won’t analyze the details of the story. I’ll leave that to everyone else. I do wonder if the NOMACS are actually all that important to the story. I mean couldn’t it have been told without this Dyson vacuum looking machines? Just say there is no music at all. I guess that makes it into 2112. And this is further into the future than that album!

With 34 songs, well 29 songs if you exclude the 5 noise machine tracks, even for a double album, this could a lot of separate ideas or ideas that run into each other, thus needing each other to exist. “The Astonishing” falls into the former. Each song, while yes being important to the overall story lyrically, are separate ideas musically. I really love that about this album.

So the next key is if all of those songs are actually GOOD songs. There’s no getting around that this album is really long. It’s a true double album at around 131 minutes. That’s a LOT to take in at once and a lot to take in over and over again. The reason is this is a double album of the CD age versus the vinyl age. “The Wall” and “The Lamb Lies Down on Broadway” are shorter albums because of the limitations at the time of vinyl. And while each of those are considered classics, I think each have a fair amount of filler and could have been each paired down to a single album. BLASPHEMY!

While “The Astonishing” isn’t perfect from start to finish, I think it actually has far more great moments than not. In fact, I don’t think I would edit anything out except for those damn 5 noise machine tracks! Yes I know they are kinda part of the plot but they aren’t stand alone pieces of music. The other good news is that there’s not a lot of unnecessary sound effects and dialogue. The story is really told via the lyrics the way it should be done.

Performance wise, this is the best album from James LaBrie ever. He sounds absolutely incredible from start to finish. While it’s hard to tell which character he is sometimes, that’s why they make lyric sheets letting you know who is saying what. LaBrie is a very busy man on this album and nails it. The other member who really shines is Jordan Rudess who co-wrote all the music with John Petrucci. Limiting the song writing team does make the music more focused and a better fit for Petrucci’s lyrics and story.

Rudess plays a lot of piano on this album which is great because he is a great player. That has always been an underused instrument as far as I am concerned in the history of Dream Theater. Rudess has never sounded better in my opinion. This makes a number of the songs SEEM like they are “ballads” but many times it’s merely a section of the song rather than the whole thing. It’s a lot like “Surrounded,” my favorite Dream Theater song. Many consider that a ballad but it really isn’t when you examine where the song goes. That’s what MANY of these songs do. They don’t stay in one place. Rather they are arranged to fit whatever the lyrics need at that time for the proper emotion.

Musically, this really isn’t what I would consider prog metal. Sure there are moments of shredding and riffing but the overall vibe of it is prog rock. The production is very bright and there’s plenty of space to allow the listener to focus on the lyrics. There aren’t layers upon layers of guitars either. Kudos to Petrucci for letting the other members of the band carry the load on this one. He has plenty of quality riffs on tracks like “The Gift of Music,” “A New Beginning,” “Moment of Betrayal,” etc.

This review is like listening to the album at this point. But there’s more! The orchestration and use of a choir, directed by David Campbell, add so much to the album. Fans of symphonic metal will definitely find a lot to enjoy here. The problem will be for the fans who prefer when Dream Theater solo a lot and basically do the mid section of “Metropolis Part I” over and over again. This album is NOT about that at all. I think “The Astonishing” will be the band’s most divisive album to date, even exceed what “Train of Thought” did to the fanbase years back.

The challenge with “The Astonishing” is that it is very long, not very metallic and basically “Broadway prog” to quote one of my Facebook friends. This album could make a nice mini-series or movie or yes, even a Broadway musical. That in and of itself won’t go down well with a fair number of Dream Theater fans. Also, this album is not going to “win over” new fans either really. I suppose it’s possible but it’s not the easiest album to throw at a potential new fan.

I really like this album a lot. It shows that the band is willing to take a huge risk, even performing this album (and ONLY this album) in its entirety on the upcoming tour. It has some great songs too! I love the over the top “Three Days,” including the goofy ending. “Hymn of a Thousand Voices” is like “Solitary Shell Part 2” and I love that! The bagpipes on “The X Aspect” are also really cool and unique. The arrangements fit the story at all times and you feel like you are caught between the future and medieval times.

Hopefully, fans will give this album a chance to sink or swim. It’s not an album, I think, that you can really make a final judgement on after a few listens. Even my rating here might change even a week from now! I do know that I really like this album. “The Astonishing” is NOT Dream Theater’s best album but it could very well be one of their best albums looking back after a while. This was the album that Dream Theater needed to do, not only for themselves but to show everyone that they are a PROG band, first and foremost.

Sorry for the long review of a long album!

————————————–
UPDATED August 7th:
I’ve decided to give an update to my original review. After sitting with “The Astonishing” for six months, I’ve found that I don’t like it as much as originally did. With an album as big as this one, it’s hard to grasp everything in a few days. And as with many double albums, there’s a fair amount of filler.

The problem is definitely that it’s too long and that the shorter tracks that seem to be DESIGNED for the story just don’t hold up on their own. For me to love an album long term, every song should be able to stand on its own. “The Gift of Music,” “When Your Time Has Come,” “Three Days,” “A New Beginning,” “Moment of Betrayal,” “Hymn of a Thousand Voices,” and “Our New World” are songs that stand on their own and rate with anything that the band has done.

Songs like “Lord Nafaryus,” “Ravenskill,” “Heaven’s Cove” and the title track are still good songs but maybe the next rung down. Many of the other tracks just don’t hold up well on their own. Could this album have been a better single album? Definitely. And in the process it probably would translate better live.

4 Responses to Dream Theater – “The Astonishing”