Dark Alternative Rockers, Antimatter, are playing at The Castle Hotel, Manchester, on the 26th of March and at Bristol’s Exchange on the 27th of March in support of their critically acclaimed 6th album “The Judas Table” released in October by Prophecy Productions.

“The Judas Table”, explains singer/songwriter Mick Moss, “is a concept album exploring the residual bad energy left in the psyche after falling in and out of a relationship with a toxic personality, and also examines the driving force behind betrayal, lies and manipulation.”

The Castle Hotel and Exchange concerts marks only the 8th and 9th UK appearance in 15 years by Antimatter, who’s consistent touring ground has remained mainland Europe as well as recent stints in South America. Previous home soil gigs have included two spots at Marillion Weekend and Marillion Christmas, as well as with Icelandic rockers Sólstafir.
The video to the song “Stillborn Empires” was also released in October https://www.youtube.com/watch?v=e06YDLbTNZA with animation by Tomfoolery Pictures.
March’s appearances are part of the current The Judas Tour, so expect a setlist with tracks pulled from this years release right back to the debut album “Saviour.” 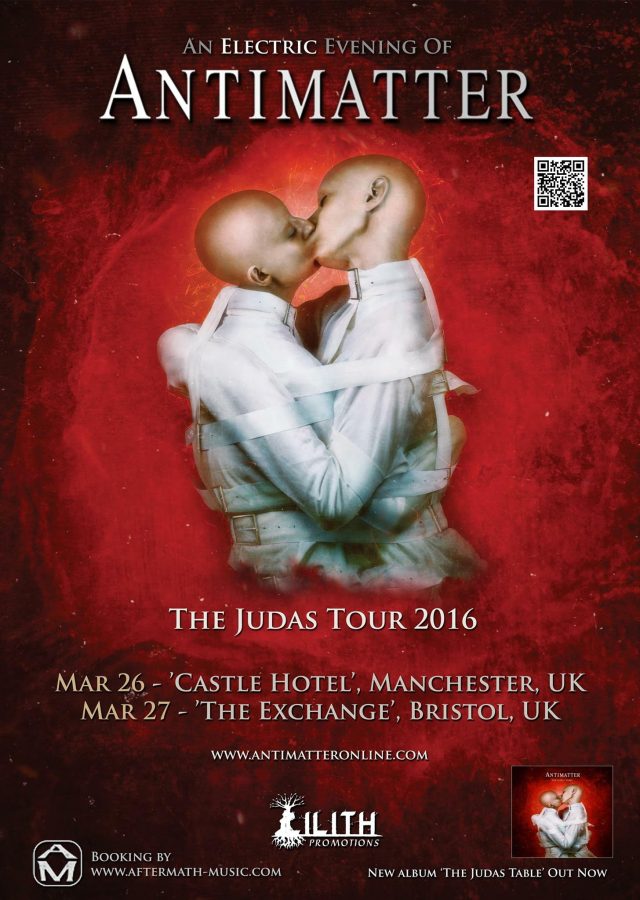 I have been a fan of progressive metal and progressive rock for most of my life. My music collection is insanely large. My passion for life is music...progressive music!
View all posts by Rob →
This entry was posted in art rock, progressive rock and tagged news. Bookmark the permalink.