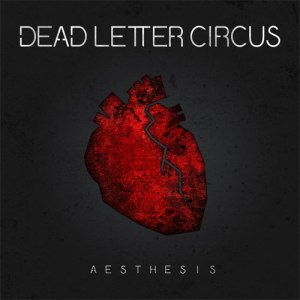 What does that mean for this new album? Unfortunately, “Aesthesis” lacks the fire power that I’ve come to expect from Dead Letter Circus. “This is the Warning” kicked such major ass because it was FULL of energy. While the band did dial it in a little bit for “The Catalyst Fire,” this album sounds like the band is either out of gas or just wants to mellow out more.

The music SOUNDS like them but they just never kick things into high hear. Songs like “The Burning Number” and “Change the Concept” have all the makings of classic DLC songs but are too slow to be interesting. DLC on Quaaludes? “While You Wait” sounds like what it is, DLC trying to write a 3 minute pop song to get a hit.

“Silence” is another slower track that eventually speeds up a little, only to be marred by a children’s choir chanting “Liar!” It’s really fucking annoying. This isn’t a BAD album because singer Kim Benzie can really sing and he knows what makes a good melody. However, even he sounds like he is trying to be more user friendly versus opening up the throttle the way he has on the first two albums.

I really think that “The Catalyst Fire” wasn’t the band trying to find their way after their first album but rather, it was a transitional album to “Aesthesis.” I probably should have realized it since even the artwork for this album isn’t up to the standards I expect from this band (it’s terrible). The bottom line is that Dead Letter Circus are better than this, but I think they are dumbing it down to please the masses.

I have been a fan of progressive metal and progressive rock for most of my life. My music collection is insanely large. My passion for life is music...progressive music!
View all posts by Rob →
This entry was posted in pop rock, progressive rock and tagged music review. Bookmark the permalink.