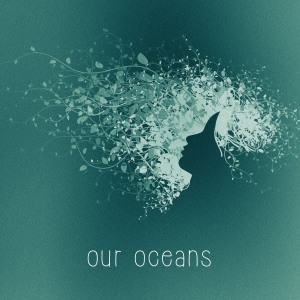 Our Oceans is a side project consisting of Tymon Kruidenier, Michel Nienhuis and Robin Zielhorst, all of whom are in the band Exivious. Kruidenier and Zielhorst were a part of Cynic. While Exivious is an all-instrumental tech prog metal feast in line with Cynic, Our Oceans is a different animal. They are joined in Our Oceans by drummer Jasper Barendregt who is a member of black metallers Dodecahedron with Nienhuis.

When I first heard about this project, it was to be fronted by vocalist Noora Häkkinen. However, Kruidenier is now both guitarist and vocalist. With all due respect to Häkkinen, the key to this album is the incredible vocal performance turned in by Kruidenier, who has a beautiful falsetto and a great, powerful range. I hadn’t heard his clean vocals before, only his harsh vocals which he performed with Cynic on “Traced in Air.”

Musically, the album is very melodic, quite mellow and wanders perfectly between post rock and shoegaze with some prog spinkled in. Another highlight of the album is the fretless bass work of Zielhorst which is absolutely sublime. While this is not Exivious or Cynic, it actually reminds me of the mellower moments that Cynic has worked into their repertoire of late.

There are times on their self titled debut that Our Oceans even sounds a bit like Portal, the band that Cynic briefly became in the early 90s, “What If” in particular. “Lioness’ Sunrise” actually reminds me a bit of The Alan Parsons Project, melodically. It has more bombast than APP though. Elsewhere, “Illuminate” is an airy bit of shoegaze while “Turquoise” showcases the nimble fretless bass of Zielhorst that I’ve previously mentioned. Kruidenier sounds amazing on that track too. Add in a bubbling guitar solo and that track is a favorite of mine.

The bottom line is that Our Oceans is NOT Exivious but for me, I actually prefer this! Don’t get me wrong, I love Exivious! But this is a beautiful album that will no doubt be a “go-to” album for me going forward. “Our Oceans” is an insanely gorgeous album created by an immensely talented band. If Exivious and Our Oceans were ever to merge, the universe as we known it would cease to be.

I have been a fan of progressive metal and progressive rock for most of my life. My music collection is insanely large. My passion for life is music...progressive music!
View all posts by Rob →
This entry was posted in atmospheric metal, experimental rock, post rock, progressive metal, shoegaze and tagged music review. Bookmark the permalink.