The Alea Dilemma – “Within the Clamor of Voices” 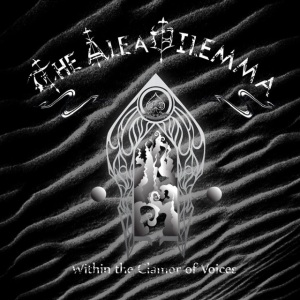 It’s nice to hear a true progressive rock band. When I say that, I mean ROCK. While they are not metal, the Alea Dilemma are definitely prog and they are ROCK. Hailing from Kansas City, this trio are very tight, great players but never over play. “Within The Clamor of Voices” has songs that are full of hooks and enough twists and turns to keep all prog fans very entertained.

The band have a Rush vibe but imagine if Rush were more concerned with jazz in the vein of Mahavishnu Orchestra. The progressions are definitely from the jazz world but the tunefulness of these songs are rooted in more mainstream prog. All three members can play and guitarist Danny Brymer can SING! The man can really bring it. The album also has plenty of keyboards in the right places to fill out their sound as needed.

The album opens with a killer one-two punch of “I.D.” and “Altars” which if this were a kind, intelligent world (it isn’t), each would get radio play. I did play “I.D.” onmy radio show. From there, the instrumental “Down the Rabbit Hole” showcases the technical aspect of The Alea Dilemma, but not over playing. The guys are not about a billion notes. They are about the RIGHT notes being played at the right time.

“Forsaken Pawns” is a blues/jazz hybrid which works really well. Danny uses a stereo chorus on his guitar which gives it an odd vibe that I love. Normally, I am not a blues fan but the song (like most of their songs) does not stay too long in one place. These songs all move and, as I said, ROCK. “Beyond the Realm” is a well placed ballad of sorts.

That’s another point. This album is really well sequenced. For me, that’s a lost art form. The guys know how to get the most out of the album format with a great flow from song to song. The album builds from track to track before ending with the 2 epics, “The Machine” and “Survive Another Mile.” Both of those tracks are more about the space that the band gets from doing longer tracks. These are not over indulgent wankfests. Rather they are carefully crafted prog rock, with “The Machine” being a heavy jazz rock song. “Survive Another Mile” is the dramatic prog song that is needed to end a great album like this. Another great vocal from Danny too.

Bands like The Alea Dilemma restore my faith in progressive rock. Prog metal seems to be taking all the chances, while prog rock is satisfied being boring neo-prog almost afraid to truly ROCK out. Rocking out doesn’t make you a metal band. On “Within the Clamor of Voices,” The Alea Dilemma have proven that prog rock can still be technical and intricate but also melodic and catchy as hell.