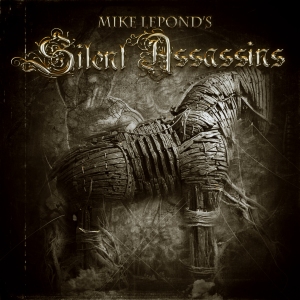 Many artists have preserved their sanity with side projects. Symphony X is a band with a few side projects from its members. Most notable being Russell Allen’s involvement with Adrenaline Mob, which I really dislike. Fortunately, Mike LePond’s Silent Assassins are nothing like Adrenaline Mob obviously. This project gives the bassist free reign and he takes full advantage.

Musically (and even lyrically), it isn’t THAT far from Symphony X at times. That being said, Mike LePond’s Silent Assassins do things that Symphony X do not do or haven’t done for a while. The self-titled album feels like Symphony X meets Overkill at an Iron Maiden concert. The main issue is that the drums sound programmed which does seem weird in light of the talent LePond could probably get to perform on the album.

Mike plays rhythm guitar in addition to bass and wrote the entire record. Watchtower vocalist Alan Tecchio gives a solid performance and channels Bruce Dickinson now and then. But Mike LePond’s bass always leads the way. Whether it’s an intro to a track or just driving the track along, you can always hear his bass prominently. It’s his album so that is a given. Since he is an amazing bassist, it’s great to be able to hear his playing so clearly.

Song wise, the album ranges from songs like “The Quest” which could have been on any Symphony X album and fit RIGHT in to “Oath of Honor” which definitely channels Maiden at their most epic. Many songs have a thrash meets power metal vibe with a clear nod to fellow New Jersey residents (and friends), Overkill. Check out “Red Death” or “Silent Assassins” to hear some killer full throttle metal.

The self titled debut from Mike LePond’s Silent Assassins will please many fans of Symphony X but it should also appear to fans of more straight forward power metal. There’s not a hint of cheese however. This album rocks, the songs are well written and the arrangements are all tight. It’s a solid yet unspectacular debut.